Pete Wernick – On a Roll

Pete Wernick, aka Dr. Banjo, has assembled a large and talented array of musicians to assist in the production of this new CD, which features two distinctly different types of music. The main group, heard on a majority of the sixteen cuts, consists of guitarist Jeff White, mandolinist Tim O’Brien, bassist Gene Libbea, and Stuart Duncan on fiddle. Five other selections are played by “The Live Five:” Pete, George Weber on vibes, clarinetist Joe Lukasik, bassist Rich Moore, and drummer Kris Ditson, an obviously more jazz-oriented quintet.

“Spring Break,” the first tune that Pete wrote after Hot Rize disbanded, is also the first of eleven Wernick originals heard on the CD. This tune is a rich, full, fast-paced banjo celebration, and also includes a soaring fiddle break. The traditional “Down In The Valley To Pray” has been transformed into a beautiful instrumental, buoyed by Stuart’s classy fiddle tone and Pete’s right-on banjo picking, while “Cindy” hosts the lead vocals of Tim O’Brien, another ex-Hot Rize star.

The title cut is our first encounter with the Live Five and is quite memorable As banjo and drums set the tempo, the vibes kick in and off we go on a roller-coaster rhythmic ride, with a driving clarinet acting as tour guide. All the musicians take an extended lead on this exciting six minute instrumental cut. Not to be outdone, the other boys show their prowess on “Limber Jack,” another Wernick original instrumental. Led by solid banjo, headstrong mandolin, flashy fiddle and tasty guitar, this tune also showcases the hot dobro of producer Jerry “Flux” Douglas. Then it’s back to the Live Five on Wernick’s “Boulevard Strut,” as swinging clarinet and soulful vibes meet righteous banjo.

Russ Barenberg, makes his presence heard on Pete’s “Birdsong Creek.” Mr. Barenberg’s subtle, yet distinctive sound is a welcome addition anytime, even if only as a guest on one cut. This pretty instrumental moves from a heartfelt guitar lead, through bluesy fiddle licks, and on to an invigorating mandolin break. Next, Joan (Nondi) Wernick sings lead with a rowdy, sharp tone on Dave Evans’s “When The Snow Falls On My Foggy Mountain Home,” as Pete supplies the harmony vocal. The Dixieland “Farewell Blues” is handled with great panache by the Live Five, as banjo mixes expertly with clarinet and vibes.

The CD closer is “Lost At Sea,” the final Wernick original. Here, with help from understated banjo, Flux sets a pensive mood as the world class bassist, Edgar Meyer, adds his own unique sound to this sad, sorrowful instrumental.

On A Roll is loaded with great cuts of bluegrass and jazz. Mr. Wernick has taken some time to release this project, and it is worth the wait. Please don’t let the clarinet and vibes scare you off [it works], this CD is highly recommended to all.

Pete Wernick was abducted by aliens in March of 1963 and given special powers that only manifest themselves in his music. He has always been in the vanguard of experimentation, and On A Roll has kept his ‘m.o.’ intact. There are so many highlights on this album! It’s true that Pete sails on uncharted waters, but he also knows exactly when to drop anchor in the hardcore sea of bluegrass.

There are a few cuts here that expand the horizons…let me see…how can I describe it? Well, let’s run down the instrumentation.

There is Pete, of course, playing banjo and taking a foray into harmony singing (surely you must have seen Hot Rize). There are guest artists, such as Tim O’Brien (how strange), Stuart Duncan, Alan O’Bryant, Jerry Douglas, Nondi Wernick, Russ Barenberg, Edgar Meyer (abducted by same aliens in June of “65) and Gene Libbea. Oh yeah, and there’s Joe Lukasik on clarinet (quick, get a rope, find a tree), George Weber on vibes (vibes? Ain’t that hippy talk?), Kris Ditson on drums (drums–that does it, load up the B-52) and Rich Moore on bass (probably electric, agh*@**%@). For those of you who are taking the “if it ain’t like Ralph’ approach at this moment, listen up! There are some straight-ahead bluegrass gems on this thing that are worth the price of the album on their own!

“Spring Break” is a kick-off instrumental that has some of the world’s best bluegrass pickin’ in high gear. This is the type of pickin’ you get, by the names listed above. “Ruthie” is a wonderful song dedicated to Pete’s mom and dad, and Alan O’Bryant sings the tar out of it. “Down In The Valley To Pray” is a gospel song that Pete plays as an instrumental, and believe me, it’s pure bluegrass. Tim O’Brien sings “Cindy,” and any bluegrass fan knows what a great set of pipes he has. “An Old Box Of Memories” is sung by Jeff White (who also plays guitar on a portion of the recording), and I bet there are fifty local bands covering this tune right now; it’s that good.There are so many highspots in this musical endeavor, and it’s a treat to listen to.

Here’s where the clarinet, etc. comes in. There are sixteen cuts on this album, and the Live Five (the Jazz Boys) appears on five of them. They are all great players, and complement the cuts in a great way. There are those who will argue that it’s not bluegrass, and I’m sure there is a case to be made on both sides. But, regardless of that fact, it’s good music. Pete Wernick has given everyone a lot of pleasure over the years, and has the musical knowledge and judgement to know what fits and what doesn’t. Highly recommended!

Pete Wernick is definitely on a roll with this solo release for Sugar Hill. It is eclectic, imaginative, tranquilizing, and above all else, entertaining.

But is it bluegrass? Yes! It contains some of the best bluegrass you are going hear on any release this year. “Spring Break,” the opening cut, was the first song written by Wernick after the disbanding of Hot Rize and the disbanding must have conjured up remembrances of his collegiate days as the song has all the fun and fury usually associated with students’ annual spring break. The fun and fury in this case comes from Wernick’s hard-driving banjo and Stuart Duncan’s fabulous fiddle. The bluegrass enthusiast will appreciate Tim O’Brien’s vocals on “Cindy” and Joan Wernick’s rendition of Dave Evan’s “When The Snow Falls On My Foggy Mountain Home” is guaranteed to bring a smile to the face of any bluegrass traditionalist. I’m sure Dave Evans will give her high marks for her style and performance of his song.

Wernick’s genius as an arranger shines through on his instrumental arrangement of the acapella hymn, “Down In The Valley To Pray,” which is pure bluegrass, and the keepers of the bluegrass musical canons will also greatly appreciate the twin banjo work on “June Apple.” There are also songs that deal with themes held near and dear to the heart of all bluegrassers. “Ruthie,” one of the eleven Wernick originals on the CD, is a moving tribute to Pete’s mother, which Alan O’Bryant sings with great feeling, “An Old Box of Memories,” another Wernick creation, will fire your nostalgic emotions and the song is perfect for its vocalist, Jeff White.

Yes, On A Roll is saturated with bluegrass music, but it is also an eclectic and imaginative production. There are actually two bands with two repertoires on this recording, and Wernick serves as the “tie that binds.” The stellar group of bluegrass musicians includes Wernick on banjo, Jeff White on guitar and vocals, Tim O’Brien on mandolin and vocals, Stuart Duncan on fiddle and Gene Libbea on bass. In addition to those already mentioned, there are also guest appearances by Jerry Douglas, Russ Barenberg, and Edgar Meyer. The second band, The Live Five, consisting of Wernick on the banjo, George Weber on vibes, Joe Lukasik on clarinet, Rich Moore on bass and Kris Ditson on drums contribute five selections to the product.

Don’t let the non-bluegrass instruments on this recording poison your thoughts and deprive you of some fantastic acoustic music. Like an old friend who has taken on a new, but pleasing look, “Farewell Blues,” and old bluegrass favorite takes on a unique but pleasing Dixieland sound in the hands of The Live Five. Wernick demonstrates very ingeniously that the banjo, vibes and clarinet are quite compatible instruments. What results on such songs as “Farewell Blues:,” Boulevard Strut,” and “On A Roll” is a sort of dixie-jazz-grass that is both creative and captivating.

A final observation regarding what for this reviewer is the highlight of the album. If, like myself, you believe that music’s ultimate purpose is to improve the quality of life, then there are four songs on this recording that are a listening must: “Birdsong Creek,” “Haystack Rock,” ”Man Of The Mountain” and “Lost At Sea.” All four of these songs are nature related and could very well be prescribed as a non-medicinal cure for daily stress. Especially noteworthy is the blending of Russ Barenberg’s unique guitar style with Wernick’s melodic banjo on “Birdsong Creek” and Jerry Douglas’s dobro work on the hauntingly beautiful, “Lost At Sea.”

Pete Wernick is to be recommended for his selection of personnel on this recording as each individual fits the role perfectly they have been asked to assume. Producer Jerry Douglas and engineer Bil VornDick are to be commended as well for the excellent technical quality.

“Loaded with great cuts. Highly recommended to all.”

“Some of the best bluegrass you are going to hear on any release this year. Fantastic acoustic music.”

“Exciting new territory. On a Roll showcases banjo master Pete Wernick’s grasp of a variety of banjo textures. A winning combination with the talented lineup.”

“Pete Wernick is a banjo ace. The numbers cut with The Live Five sound great!”

“There is something in the sixteen tunes for everyone who likes bluegrass, the newest Wernick sounds, or just good music, banjo or otherwise.”

“One of the highlights of this CD is that it smokes instrumentally. Bluegrass and banjo fans should eat it up.”

“Should you be a lover of progressive musical adventures buy a copy as soon as possible and savour all 16 cuts. You will be giving each number full attention as you wait for further experiments to be carried, out, and you won’t be disappointed.”

“Pete Wernick is a banjo ace. The numbers cut with The Live Five sound great!”

Ex-Hot Rize banjo wizard Pete Wernick pulled a bunch of friends into the studio (Tim O’Brien, Gene Libbea, Alan O’Bryant, Jerry Douglas) and came out with his first solo release in 15 years. From the sound of this set, they had a load of fun doing it. With this crew, one of the highlights of the CD is that it smokes instrumentally. But this isn’t simply a straight bluegrass collection. With players of this caliber, boundaries get stretched.

The variety in material allows these guys to approach standards (like “Cindy,” “June Apple,” and “Down In the Valley to Pray”) with the same wide open view as they do on Wernick’s originals (such as “Spring Break,” “An Old Box of Memories,” and “Broken Vow”).

Perhaps pushing limits with his bluegrass friends wasn’t enough for Wernick on 11 of these songs, because he breaks new ground on five cuts with The Live Five, his bluegrass/dixieland group. This is inventive and fun stuff, this “dixiegrass,” as he calls it. I know I’ve never heard anything quite like it. Bluegrass and banjo fans should eat it up. 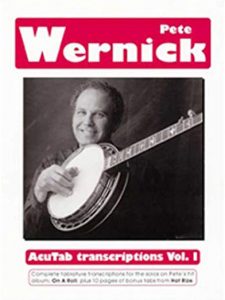 This download includes tabs for ALL of Pete’s solos on the On a Roll CD, plus a bonus section including several favorite Hot Rize breaks.