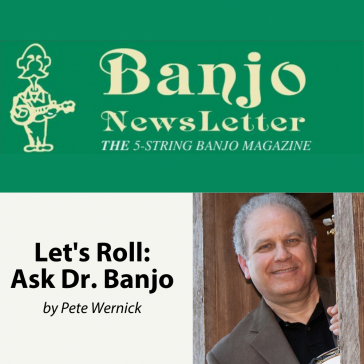 People sometimes wonder why a well-known banjo player/teacher like me has switched from teaching banjo to teaching mostly “bluegrass jamming”.… Read More

Nick Hornbuckle: Talking about having some sort of unique sound, I’m a huge fan of clawhammer, and old-time banjo. Some of my favorite banjo players are Dirk Powell, and John Herrmann, and Bob Carlin. I’d rather listen to those guys than just about any bluegrass stuff. And one of the things about that style is that they use a lot of different tunings. And so over the years I’ve been experimenting with other tunings. … Read More

I have admired Nick’s playing since I first heard it on John Reischman’s “Up in the Woods” record in the late 1990s. Besides his solid timing, tone and good taste, he’s original and interesting. His playing always captures my attention without having to scream for it. As I mention in the interview, having heard hundreds of banjo players, I like but am not usually moved too much by playing that rehashes what so many others play. Innovation or acrobatics for their own sake may get attention, but they aren’t the ticket either—I like when the playing suits the material, and sounds appealing and fresh.… Read More

When a student hires me to teach, that is, to direct their learning program, I’m sometimes awed by the responsibility. Time is such a precious commodity, and the student is not just committing to spending classroom time with me, but also to many hours practicing what I recommend.… Read More

The word has gotten around that Hot Rize played at Steve Martin’s wedding, and as with about anything involving Steve, there’s a fair amount of curiosity. For the sake of brevity, here are some sound bites:… Read More

Jim from Ohio writes: Inspired by my experience at your jam and banjo camps I have focused more on singing, increasing playing speed and clarity and learning better to improvise (“the year of the melody”). I am spending less time on instrumentals.… Read More

Duane writes: In BNL this month you mention seeing you run a jam hosted by Steve Martin on your website. Can’t find it anywhere… Would you mind sending me the link?… Read More

I just turned 61 at the end of February, and find myself reflecting on getting older and “taking stock”. I count myself lucky to have a career in music. The chance both to perform, in many places, with many fine musicians, and to teach people how to play music keeps my life interesting and fulfilling.… Read More

My Elban sounds like a “real banjo,” which it is (full 11” head, some cavity created by the resonator, though not fully as big a cavity as on a regular resonator banjo). Not the greatest banjo I’ve ever played, but a convincing sound if not up to my Granada. Through my Centaur amp, it sounds like the banjo itself sounds, unamplified. … Read More